China has become the largest e-commerce market and its online shopping ecosystem is unquestionably the most exciting, innovative & unique in the world.

Globally, it has set the benchmark for online shopping. Domestically, it has become a channel that cannot be any longer considered secondary by brands aiming at succeeding in the Chinese market. Its current scale and forecasted growth already made e-commerce a strategic priority for players across several Consumer Goods segments, from FMCG to Apparel.

China’s e-commerce success story was built on three pillars: extensive mobile adoption, widespread trusted digital payment systems, and solid logistical infrastructure. However, Rome was not built in a day: China’s e-commerce industry underwent (and is still undergoing) accelerated development cycles. For someone trying to understand how it all works, it is very easy to get lost in a maze of buzzwords and acronyms. 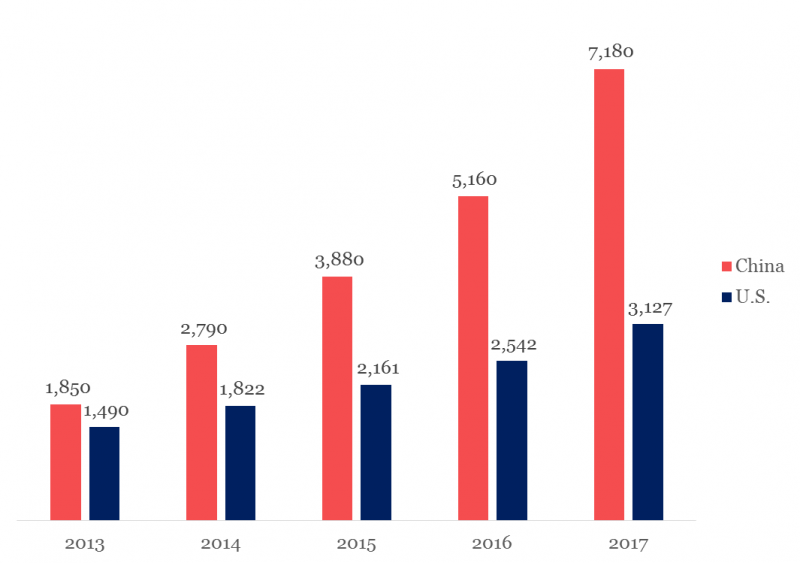 In order to fully appreciate how international brands can leverage e-commerce to reach the Chinese consumers, the first question to answer is: “How did China’s e-commerce get here? (And where will it go from here?)”.

Before getting into the specificities of China’s e-commerce, let us address the elephant in the room: the key difference between China e-commerce and its counterpart in US/Europe. Perhaps oversimplifying, e-commerce in the West has developed into an already mature retail market, and its disruption consisted of “replacing” brick and mortar players, providing value to consumers in terms of lower prices, mostly achieved through scale and disintermediation. This is clearly not the case for China, at least not anymore: understanding this is crucial to grasp the overall picture.

In China, the model quickly evolved away from the “turning offline shopping into online” premise. Online shopping here boomed in a no-men’s land: it did not try to kill brick and mortar retail, it actually tried to fill an empty space between the emerging consumer class and an underdeveloped physical retail market that was lagging behind consumer demand, and it did so way before physical retail managed to occupy it.

Pair it with the incredible pragmatism and entrepreneurial spirit of Chinese people and you had an instant winner. For instance, it provided an efficient way for consumers from Tier-3 cities to obtain brands that had stores only in Tier-1 cities. People in Tier-1 could make a living off physically going to offline shops, buying goods, and reselling them online to the customer who placed their orders through an online platform. Given this context, it is not a surprise that Taobao, a C2C platform, was Alibaba’s first groundbreaking venture that sparked the e-commerce revolution in China.

In the earliest stage of the industry, Chinese e-commerce players placed most emphasis on the C2C model. Taobao.com, eBay and Tencent’s Paipai were the three main players fighting for market share. As in most “winner takes it all” businesses, Taobao emerged as the sole victor.

In the meantime, Amazon.cn and 360buy (former name of JD.com) focused more on a direct B2C strategy, primarily concentrating on replicating the Western e-commerce success story of “turning offline sales into online sales”, starting by the most suitable product categories for this kind of model such as books, appliances and consumer electronic, therefore retaining a pretty vertical product category strategy. Many offline players quickly caught up and survived, and actually thrived, by opening their own online sales channels on top of their offline store networks (e.g. Suning). At this stage, the disruption brought by online business was still quite under control.

In early 2010s, a first big wave of change came in: the establishment of Tmall by Alibaba indicated that B2C business was becoming increasingly important for the dominating market player. Virtually all other players started to pursue a “platform strategy” too, expanding horizontally in terms of categories. Suddenly, all online players wanted to sell almost everything, as a wider offering range generated more traffic, and traffic could be used to attract brands and even monetized on. As of 2012, the C2C represented the majority of online commerce with B2C accounting only for 36.1% of the total retail e-commerce transaction in value. Since then, the proportion of B2C business has steadily increased, reaching 58.4% in 2017. 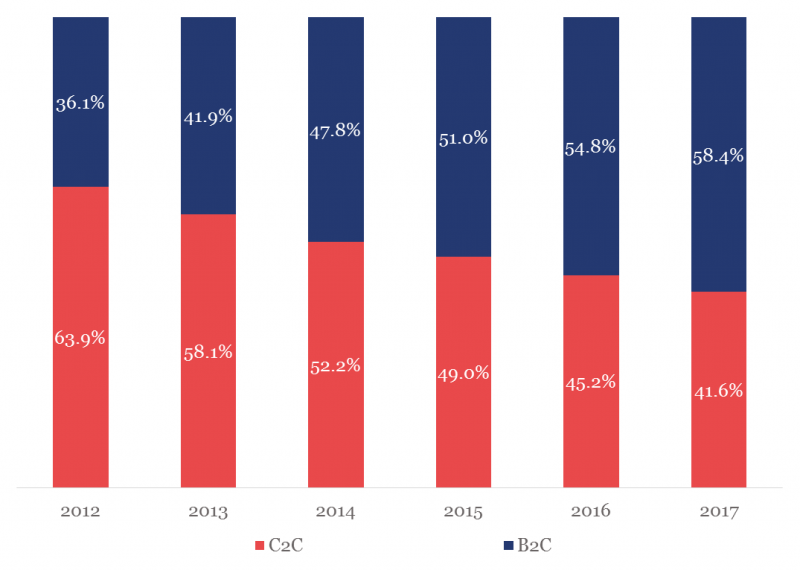 Another important element in China’s e-commerce development was that, given it developed on a blank canvas, all major players had to invest heavily into building an infrastructure that were specifically designed to support an e-commerce business, instead of relying on existing services. For example, Alibaba created Alibaba Cloud (2009), CaiNao (2013) and Ant Financial (2014): the first is the technical backbone that can handle all the digital shoppers traffic, the second supports Alibaba’s business with logistic services and the third provides consumer credit to support purchases. JD also developed its own nationwide logistics network (JD Logistics, 2007) and financing business (JD Finance, 2013). These developments are what allowed Alibaba, and partially JD too, to make the jump from “online retailers” into “end-to-end platforms” that hold all the keys to access the eyeballs, wallets and homes of China’s growing middle class.

The occasion for a second wave of disruption came soon enough: due to several factors, in the mid-2010s Chinese consumers turned their shopping impulses even more towards overseas goods, yet again the physical retail infrastructure was “lagging behind”. This shopping need was often satisfied through “Daigou” (a term referring to grey channel purchases in which a person outside of China purchases goods for a customer in mainland China) due to the lack of access to a product in China, price differences, or lack of trust in the authenticity of the same product sold in China itself. In response of this specific market demand, online platforms therefore created what is today known as “Cross-Border e-Commerce”, achieving immediate success; cross-border purchases by China’s online shoppers grew ten-fold between 2010 and 2014, from less than $2 billion to more than $20 billion.

Especially among foreign brands and marketers, Cross-border has been the keyword marking the new wave of the Chinese e-commerce industry development. Its success was so sudden and impactful that a specific regulation has been created and enforced since 2016 by the Chinese government, in particular in terms of personal quota of goods that can be purchased within a year. Cross-border is now a staple among Chinese consumers’ online shopping options, and it is perceived as a premium and reliable source, especially for “sensitive” categories, such as baby goods or cosmetics. 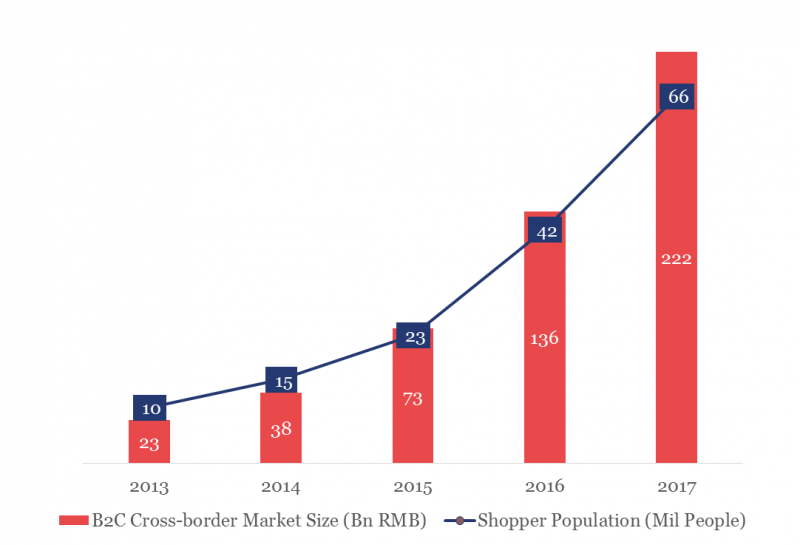 New Retail was the last buzzword to hit the industry. The term was brought to the front pages by Jack Ma himself, as a way to describe the future merger of offline, online and Big Data that in his view will redefine the relationships among stores, merchants, merchandise and consumers. In a New Retail world, brands are able to gain deeper insights about their consumers that can be used to develop new products, while consumers enjoy an omni-channel shopping experience without any time and location constraints. China’s internet giants are heavily investing in O2O services (e.g. food delivery) as well as physical stores (Alibaba’s acquisition of RT-Mart/Auchan and creation of FresHippo). The end game is clear: to remove the boundary between offline and online and solely focusing on fulfilling the personalized needs of each customer.

In conclusion, China’s e-commerce is a complex landscape and it is easy to be overwhelmed by it. While there are a lot of best practices, unfortunately there is no “one size fits all” solution for a brand in terms of which strategy to pursue when it comes to online sales. Ultimately, it depends on the awareness of the brand itself among Chinese consumers, the maturity of the product segment in China and a fine understanding of the peculiarity of each online platform and its fit with the needs of the brand. Specifically on the latter point, in the next article we propose a framework that can help brands better understand the key characteristics of any e-commerce platform in China and how they could fit into a comprehensive China market strategy.

md.ma2019-02-22T08:44:43+00:00
We use cookies to ensure that we give you the best experience on our website. If you continue to use this site we will assume that you are happy with it.OkPrivacy policy